Patrice Hubbard from St.Petersburg, Florida, attended a Positive Race Workshop that we held at the Yellowstone half marathon earlier in June, a race of many firsts for her. She is a vibrant, larger than life character who has found that running has changed her view of her world, and herself.

We recently caught up with Patrice and asked her about her running, the workshop, her race experience at Yellowstone, and what her running future looks like. Here is the result of our interview with this bubbly runner:

Can you tell us something about your running history?
In June 2010, my mother passed away from ovarian cancer. A couple of months later, I saw a flyer for the One Step Closer to the Cure for ovarian cancer 5K race and was curious. I didn’t even know what a 5k was, but I registered anyway.  My family and I participated and that was my first run ever. I didn’t run another race until the same race in 2011 and I brought a few friends. I had a team of about 15 people and then I did two more charity races that year. In 2012, I decided to ask a few more people to join me and I had a team of close to 50. After the race in 2012, I needed knee surgery from an injury that was almost 10 years old. As the 2013 race approached, I wanted to have a team again, but I thought it would be important to learn to run properly and avoid injuring my knee again. So a few months before the race, I went into a local running store for the first time and joined the Fit2Run training group. It was here that my true running journey began. I ran the One Step Closer Race in September 2013 in just over 46 minutes with no injuries and with my team of over 70 people. Then between September and December, I participated in 8 more organized races, getting my 5k time down to 34:40. In 2014, with my running coaches and friends, I began challenging myself more. In 2014, I ran 20 organized races, including my first 8k, 10k, 15k and half marathon. I also had a team of over 165 participants in the One Step Closer race, which I finished in tears. I was overwhelmed by the support of my family, friends and the running community. I had started grad school and running had to be placed on the back burner for the rest of 2014 and most of 2015. My 2015 One Step Closer team had over 65 participants, but I had no time to train and just focused on running injury free. After graduating with my Masters degree in December 2015, I couldn’t wait to lace up and hit the pavement and in the last 6 months, I have run 16 organized races including two 10ks and two half marathons; one being the Yellowstone Half Marathon. It’s been difficult to train, because I work midnight shifts, but I’m not letting that be an excuse to keep me from doing what I enjoy. 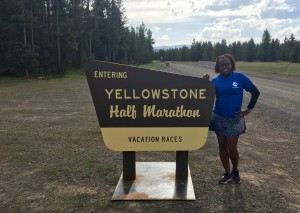 You recently ran the Yellowstone Half Marathon. What was it about the race that made you decide to enter?
A friend of mine shared the upcoming race video on Facebook and after watching it, I felt like it was something I had to experience and I immediately registered.

You came to a positive race workshop that I held before the race in Yellowstone. What was the workshop like for you, and what was your biggest take away?
It was an amazing experience that all runners could benefit from. The biggest take away for me was hearing the journeys of other runners and listening to Terry’s expertise and how his advice can be used in running and in life.

You volunteered at an aid station for the 5k the evening before the half marathon in Yellowstone. What was that like for you, and what did you learn from that experience?
This was my first time volunteering on race day and I did it for a few reasons. I enjoy new experiences and who could ask for a better opportunity? Then I realized my husband and I had never volunteered together at a race, so we would be helping twice as much. This was my first cupless race and the best way to get comfortable refilling my bottle was to work at the aid station. I didn’t realize volunteering would mean so much more. My husband and I were paired up with two other ladies that were extremely kind and helpful and we instantly became a team of four. I really saw the camaraderie of the running community and learned how deep it is. As we set up the station, we all got along so well. As the runners came through we worked great together as a team helping each runner in any way we could to have a better run. This included refilling hydration pouches, getting cups for those that forgot, passing out energy gels and even spraying mosquito repellent on runners. It really was an awesome experience and I plan to do it again.

The Yellowstone Half Marathon was a load of firsts for you in many ways. Can you share what all your first were, and which was the one you took most joy in completing?
The Yellowstone Half Marathon was my first destination race, first trail run, first run in elevation, first cupless event, first race in a national park, and first race that I followed a timed and not distance training plan. The first that I took the most joy in completing is the destination race. It is extra special as it brings two of my passions together, traveling and running. I have a goal that I call “50 by 50” and it’s to visit all 50 states by the time I turn 50. Running the Yellowstone Half helped me reach states, 28, 29 and 30 while enjoying something I love.[/vc_column_text][/vc_column][/vc_row][vc_row][vc_column width=”1/4″][mk_video clip_id=”8OWFRdLlNc0″][/vc_column][vc_column width=”3/4″][vc_column_text margin_bottom=”0″]You followed the beginner training plan from Active at Altitude, and worked with a coach as well. How important were these factors to helping you have a successful race experience?
The three vital factors to my successful run were following the beginning training plan, the constant interaction with my running coach, and attending the workshop.  The training plan gave me a guideline for where I should be in my training and my coach modified it to fit my schedule and was there to address any injury or concern. The workshop was the icing on the cake that pulled it all together and put me in the right frame of mind for success.[/vc_column_text][/vc_column][/vc_row][vc_row][vc_column][vc_column_text margin_bottom=”0″]How did your race experience at Yellowstone compare with how you expected to it be?
Excellent question! In some ways it was exactly as I thought and in other ways it was the complete opposite. The beauty of the course and the feelings of joy I experienced  while running the trail was exactly what I expected. The terrain of the course itself was far more technical and challenging. I had never run a trail run, so it was outside the realm of anything I could imagine. With that being said, now that I have completed what I and many others considered a technical course, I feel way more accomplished than I thought I would.

What was your impression of Vacation Races as race organizers, and would you run another one of their races?
Vacation Races did a great job organizing the race and providing information. I enjoyed every aspect of the race and have already registered for the Everglades Half Marathon. This won’t be a solo venture; my running coach created a team already and my Fit2Run team will be joining me as well. 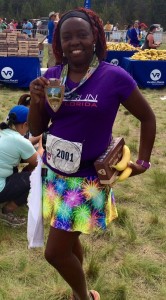 Now you have completed your first trail run at altitude, what would you say to another runner who is thinking of following in your footsteps?
Follow a training plan to prepare as much as possible, so that the race is pleasurable. I enjoyed an amazing experience due to my preparation. And most importantly…. enjoy race day.

What are your race plans for the rest of 2016, and any more challenges on the horizon?
2016 is full of adventure for me. As a result of the Yellowstone Half, I am now training for the Oregon Wine Country Half Marathon in August. In September I will complete the One Step Closer 10k and the Inaugural Disneyland Half Marathon in Paris. November will be the Inaugural Everglades Half Marathon and the Myakka Half Marathon and I will complete my 7th half marathon this year in December with the Holiday Half. I met with my running coach, Carolyn Kiper, to discuss my upcoming running plans. In February 2017, I am planning my biggest challenge thus far: the Gasparilla Amber Challenge which is a 15k and 5k Saturday, followed by a half marathon Sunday. There are a few other races that I am interested in and I asked Carolyn if my schedule is too full. I love her response when she said that it’s never too much, we just adjust accordingly.

activacuity provides a daily dose of positive guided imagery or visualization sessions. Find out what you can do when you make that mind-body connection – check out our subscription options here