Imagery engages all the senses, using sounds, smells, tastes and kinesthetic feel, inside and outside the body, and includes emotional responses too.

When I studied Sports Psychology at DeMontfort University in Bedford, England, I was fascinated by guided visualization, guided imagery or mental rehearsal. Imagery or visualization has often used synonymously – however imagery alone involves all the senses, and emotions as well. Rehearsal is usually given to cover mental practice of a particular movement pattern or patterns. One of the first examples of imagery and visualization that I read was about one of my childhood athletic heroes. David Hemery won the 400m high hurdles gold in the Mexico Olympics in 1968. He won by 8m and set a World Record. I recall shouting at the TV as I watched the race at home, blown away by the manner of his win – so much so that I didn’t notice at first that another GB athlete, Robbie Brightwell, had battled through to collect a bronze medal; a wonderful day!

Fast forward 24 years, and I started to understand how Hemery came to dominate that race. He stated that he intended to win, it wasn’t some hope that he might do so. His goal, to win the gold, and set a World Record in the same race, was the culmination of years of focused training. What made the key difference for him though was his mental preparation. He would imagine every possibility that could happen in the race – the weather, time changes, and competition. He rehearsed every possibility of how his competition might run in the race, picturing himself and his opponents in every lane combination possible. He asked himself how he could achieve his best in every circumstance, and what he would need to do in order to win gold, and set that record. When he settled into his blocks for the final, he already knew that he could win this race, and how he was going to do that. He also said: “I also attempted to avoid thinking about what might go wrong. If you picture the best that you could do in the condition you are in before the race, then you are more likely to execute this under pressure, even if it’s only in your imagination.” 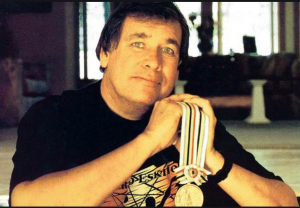 Four years earlier than Hemery, US athlete Billy Mills won the Olympic 10k gold medal in Tokyo. Mills was a rank outsider, and yet set a Wold Record to win his gold medal – Mills is still the only US athlete to have won an Olympic gold medal at this distance. Mills credits his victory to not only his physiological training, he also used imagery on a regular basis to help him achieve his goals, and realize his dreams. Check out this video (link from picture), where Billy talks about how he used imagery to prepare for his bid for Olympic gold. “The subconscious mind cannot tell the difference between reality and imagination.”

Elite athletes have been widely reported as using imagery “extensively, and to great effect.” (Jones & Hardy, 1990; Orlick & Partington, 1988). Orlick & Partington reported that 99 of them used imagery for both training and competition. (Murphy, 1994). Studies have also shown that negative imagery has a consequentially negative effect on performance (Hardy, Jones, & Gould, 1996).

Who is this for?

Imagery has also been used to aid healing from injury – I used a specific imagery script to assist my right femur to heal after I fractured the largest bone in my body in an accident in 2013. Furthermore, I used imagery to visualize myself running again before I could actually commence physical training again.

Imagery has not only been used to good effect by athletes and coaches, clinicians and researchers have also proven that guided imagery could reduce the unpleasant side effects of cancer and its treatment (nausea, fatigue, anxiety, pain, stress, depression, fear of medical procedures), and that it could enhance coping ability, quality of life, energy, hopefulness, confidence and motivation. See more on this at this Huffington Post feature. Many life skills and situations have been enhanced through the use of directed imagery.