Everything starts with a dream. This positive running story is all about a dream that was on a trail runner’s mind, wondering if her dream could actually come true. Mirabelle Tinio, a trail runner from Vancouver, Canada, contacted me about attending one of our camps in 2012, and wondered if our camp could help her on her journey. I was eager to help Mirabelle achieve her dream, and the rest, as they say, is history! Mirabelle is a wonderful example of what we can achieve when we take the brakes off, and move with intention toward a lofty goal. Mirabelle’s dream was to represent Canada at the World Mountain Running Championships.

How long have you been a runner, and can give you us a quick overview of your racing history?
I’ve always been quite active and enjoyed dancing, playing soccer and other sports, hiking and camping all throughout my childhood and youth but I only ran my first 10k in 2004, at the Vancouver Sun Run. Until then, my longest race had been a 1500 meter race at an elementary school track meet. It seemed to take an eternity to complete those 3.75 laps and I thought I was going to die!!!  In total, I’ve been a runner for about twelve years.
Through running, I discovered a side of myself that I liked – I felt feisty and strong, mentally and physically. 10k races lead to longer distances… A friend convinced me into doing a triathlon; a sprint, a half iron man and then an ironman (which makes me officially insane, I know)… The same friend (thanks, Carol!) suggested I try a trail race and that’s when my real passion for running started. During my first trail race, after running over many hills, roots, rocks and mud, I remember running the final kilometer of the race and tripping and falling on my face on the single, solitary pebble on that trail. Bam! I quickly looked around to make sure no one saw me fall, dusted myself off and sprinted to the finish. Of course, I was hooked! There were so many highs and lows during that race; it felt like such an epic experience. In the mountains, I found my playground. Sweating, leaping, flying in the trees makes me feel so much more alive.

What do you love about trail racing?
In the end, it really boils down to the people with whom you can enjoy your preferred activity. And people are always better company when you have run a few kilometers with them on trails, tired and sweaty. Nietzsche wrote (in A Path to Equality), “Fatigue is the shortest way to Equality and Fraternity…” Trail racers, including anyone who loves spending time on trails, are generally great people.

You initially contacted me in March 2012, interested in one of our women’s running camps, and if our camp could help you with a dream of achieving something very special. Can you share more about your dream, and why it was important to you?
I had been enjoying trail racing at local races, when my boyfriend suggested I try out for the national mountain running team. I didn’t think I had a chance but he believed in me so much that he convinced me to give it a try. I wanted to try out because I thought it would be such an honour to run for a national team and loved the idea of traveling and discovering new mountains. It seemed like the ultimate adventure for a runner like me who had never done anything like that before.
The first year I tried out, the qualifying race was held at higher elevation. I ran hard but did not make the team. The next year I decided I would try to train at higher altitude to be ready.

What was your experience like at camp, and how did the experience compare with your expectations?
Camp was amazing. I found so much support and love from Terry, Jacqui, Angelina (whose motto is, “It’s never too late to become what you might have been”), Melody (an inspiring professional runner) and all the runners I got to know. As a runner seeking to reach for the stars, I was fully nourished by this camp. I learned a lot about training, rest and recovery, and the importance of mental preparation. I gained a lot of confidence. I went to camp in order to do altitude training but I came back with so much more ….

You formed a strong bond with your buddies in the bunk room, even though you had each come from very different backgrounds. Can you share what made those friendships so special?
People really opened up to the group, sharing their dreams and fears. Everyone was very supportive. Carolyn, an athlete and scientist with a spunky sense of humor, always made everyone laugh. She was struggling to balance out a heavy work load with other parts of her life. Her struggle resonated with me. Catherine, an Alaskan physiotherapist had overcome cancer and ran through freezing winters to become a top age grouper specializing in half marathons. Ginny, an amazing runner, who regularly hits the podium on trail and road races, also inspired me. And then there were other women who shared their thoughts and feelings. One woman was told she could never run because she didn’t have the proper build, another woman was juggling being a mom and a professional…This experience was huge in helping me feel more comfortable with my doubts and trepidations and being okay with daring to dream. Essentially, we were all striving to become our best selves and achieve goals, whether society perceived these goals as lofty or not.

I could see your confidence grow during the camp. How much closer did your dream seem at the end of the camp than before you arrived?
At the end of the camp, I was no longer afraid to give the qualifying race my best shot; to get out of my way and give it all I had on race day. I definitely felt like anything was possible, and I was less inclined to set limits for myself.

What happened to you once you left camp, and how did this continue to help you prepare for your qualification race?
When I left camp, I returned home and PB’ed at a local 5k race. I continued my training with friends who noticed that I had gained a lot of confidence. Either that or they noticed my wicked sock and short tan lines.

How did your qualification race go, and how did you feel once you knew you had achieved your dream?
During my qualification race, my family’s and friends’ support (including the Active at Altitude family) gave me wings. I imagined their words of encouragement and support lifting me up the mountain during the race. At the start of it, I had gone too fast and lost a few spots. I had to slow down to regain my composure but once I did I moved up… I remember running fast downhill in the last few kilometers knowing I couldn’t let up because I wasn’t really sure what position I was in…And when I crossed the finish line, I was told I had come in third. I listened to the news in disbelief and asked someone to check for sure. The crowd at the finish line was small; it was cold and rainy at the top of the mountain. But I was so grateful and happy to see my parents and friends without whom I would never have made it to the finish line … Despite the dark, grey skies and the rain, the sun was beaming down on us.  We were going to Worlds! I am so thankful for everyone who had helped me achieve this dream, and I received such wonderful words of congratulations and encouragement from friends and family in Canada and the U.S. Not to mention a tin of George’s cookies from my friend Carolyn in Idaho! I knew I couldn’t have done it alone. I was going to be on the national team!

When you went to Italy for Worlds, how did you feel to really be there, and how did this compare to your expectations?
I was quite nervous about being in Italy. I guess that, to some degree, I still felt like I didn’t deserve it. I kept second-guessing my preparation and training… I was careful with my nutrition, I was very strict about getting the correct amount of rest… I really wasn’t able to enjoy being there until after the race. I remember the opening ceremonies, where each country paraded into the small, windy cobblestone streets on the way to the stadium. That was pretty awesome. It felt like we were celebrities. The race through an old village and into trails that were normally winter ski runs was tough, as it should be. I remember hearing cheering in different languages; “Allez, allez” in French, “Andale” in Spanish, “Vai” in Italian. I also got the occasional “Go Canada!” yelled out in lovely Romance language tinted accents. I recall the final kilometer of the race where the trail was lined with fans who were literally centimeters from us, yelling and ringing their cow bells. Their loud cheering gave my dead legs a second wind. After crossing the finish line, since I had to return home the next morning, I had about an hour before the closing ceremonies to try all the local Italian delicacies; an espresso, a slice of pizza, an Italian pastry, liquore di crema  and of course, gelato. I don’t think the fact that I had “made it to Worlds” really hit me (like that strong Italian liquor did) until I had returned home to Vancouver. My only real regret after this experience was not being 100% present for every moment of this amazing adventure!

After your experience, what would you say to anyone that has lofty dreams that they may feel are out of their reach?
There is always more to gain than to lose when reaching for our dreams. So just go for it! No regrets! But there is more to life than running. Run to live, and not the opposite. I really like the saying, “Shoot for the moon. Even if you miss you’ll land among the stars.”

Subscribe to activacuity, the first guided imagery app for athletes, and learn how to focus on the many positives about you, and find out how to achieve your dreams!

From Estes Park, Colorado, USA, the home of the POSITIVE RUNNING MOVEMENT™. 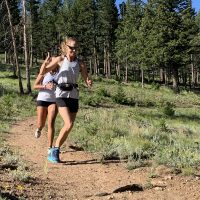 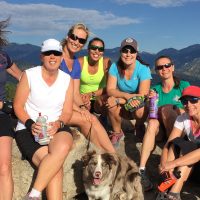